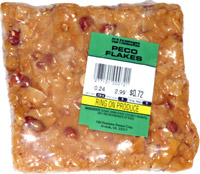 Taste test: This snack was a bit unusal, as we found it in the produce aisle, and it was looked like a square piece of peanut brittle, about five inches on each side, with just a clear shrinkwrap wrapper.

After reading the ingredients, it still sounded like peanut brittle, except that it contained coconut. Upon biting in, there was an impressive crunch, at or near the top among the peanut brittles we've tasted. It was a solid piece of brittle, and it took some effort to break into it for the first bite, but it wasn't so hard as to risk breaking any teeth. The taste was very good, with a strong hint of coconut mixed into the sweet peanut brittle taste. There were lots of peanuts in there, some of which broke loose during eating.