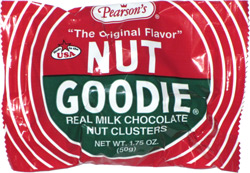 Taste test: This roundish, lumpy cluster had a mostly milk chocolate exterior, with some bits of peanuts jutting outside the chocolate.

The bottom of the cluster was perfectly flat, while the top was oddly shaped, with the outlines of some peanuts showing (in addition to the parts that were jutting out). I bit in to find that in addition to the expected chocolate and peanuts, there was a coconut-looking layer at the bottom. Except that based on the taste (and the lack of coconut in the ingredients) I think it wasn't actually coconut. But it was really tasty, with lots of chocolate, lots of nuts and a bit of a contrasting texture and taste from the creamy non-coconut layer. Very good.