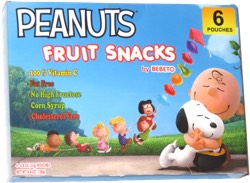 Taste test: As a longtime fan of the Peanuts comic strip, I was pretty excited to see this gummy snack based on Charlie Brown, his friends and his dog. But even before opening the box, there were some obvious problems.

First and foremost, the depictions of the snacks in the box made it clear that they fell into the same trap as the Simpsons Fruit Snacks — the Peanuts theming was limited to the box and did not include the snack itself. The gummies were shaped like various kinds of fruit, not like any of the Peanuts characters.

Next, there was some good art on the front depicting Franklin, Linus, Sally, Schroeder, Peppermint Patty and Marcy struggling to hold a kite string that included not just a kite but also six gummies on the same string. But why no Rerun? Linus's (nearly identical) little brother is one of the great Peanuts characters of all time, yet he never seems to get included in any of the licensed products!

As for the gummies themselves, they came in several different shapes and colors. All of the shapes had one flat side, so they only looked close to the intended fruit shape if you looked from the correct angle, and even then, the shapes just weren't great. The orange ones were shaped like domes and did indeed taste like oranges. The green ones looked kind of like pears, but the shape reminded me more of bicycle seats. They had kind of an apple/pear-like taste. The red ones looked remotely like strawberries (the ones pictured on the box had better detail than the real ones) and also tasted remotely like strawberries. Two kinds — teal and purple — shared the same shape, which looked initially like a football (which would be great for a Peanuts snack) but probably were supposed to look like a lemon? The purple ones definitely tasted like grape (which makes no sense for the shape) and the teal ones were some sort of fruit, but certainly not lime. All of them were very chewy, fairly average as gummies go.