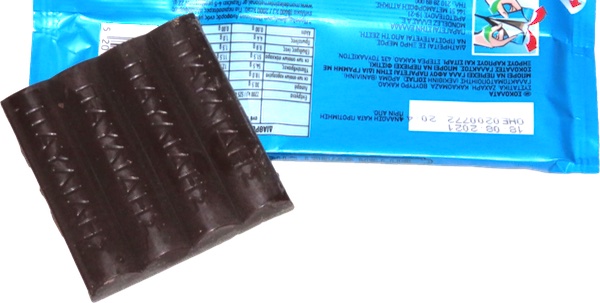 Taste test: This large chocolate bar from Greece had an unusual section configuration, with nine domed-profile sections, each spanning the full width of the bar. The chocolate was fairly dark in color, and the word "ΠΑΥΛΙΔΗΣ" (which translates as "Pavlidis") was atop each section.

The sections were somewhat tough to break apart, and once a section was broken off, it looked like a mini bar of its own (roughly the size of a single Kit Kat finger, though shaped differently). I bit in to find a fairly solid feel, with a good dark chocolate taste, nicely sweet. I enjoyed several sections in fairly quick succession, along with some cold milk.

Trivia: This was our first time attempting to type a snack name in Greek for a review. It actually said "ΣΟΚΟΛΑΤΑ ΠΑΥΛΙΔΟΥ ΥΓΕΙΑΣ" on the wrapper, but we changed it to upper and lower case to be consistent with how we handle most snacks, reordering the words to match other usage that we found online.