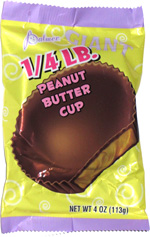 Taste test: This peanut butter cup wasn't nearly as big as the Giant Reese's, but it still dwarfed every other kind of Reese's, measuring 3-1/2 inches in diameter and almost three-quarters of an inch thick.

There was no packaging other than the outer wrapper, and after ripping it open, I used it to hold the cup while biting in, thus avoiding touching the milk chocolate exterior with my fingers. It was quite good, with a fairly thick layer of chocolate on the outside and almost half an inch of peanut butter filling. It didn't duplicate the taste of Reese's, but I still liked it a lot, as there was a great sweet mix of peanut butter and chocolate. After several bites, it left a very sweet feel in my mouth, but I was planning to have some cold milk with it anyway, and that made it even better. Quite a big PB cup for just $1.

This snack was discovered by Jeremy at Dollar Tree. Review published March 2013.