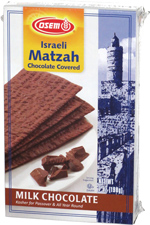 Taste test: I've never been a huge fan of matzah, but coating most things in chocolate does make them better. This box contained five half-sheets of milk chocolate-coated matzah. The coating was pretty thick.

I crunched in to find that the coating made it far better than plain matzah, but it still was not nearly as good as just plain milk chocolate, so I blame the matzah. The milk chocolate was decent but not great (it was far from the best Israeli milk chocolate we've tried).

One surprise in the taste (and complaint in some cases when we shared these around) was that in addition to the milk chocolate, there was a hint of mint. When we reviewed the chocolate mint version of Osem's matzah, people generally liked it, but not enthusiastically so, and one complaint we heard a lot was that there was too much mint. There's an argument to be made that when you get mint chocolate, you should not complain that there's too much mint. (It's kind of like mocking Keith for complaining that there's too much tuna in his tuna sandwich.) But that same argument doesn't quite hold water in this case. This was labeled as milk chocolate, and we can't remember every buying any other non-mint milk chocolate that tasted like mint. If they don't say there's mint at all, "too much mint" seems like a valid complaint.

From the package: “Kosher for Passover & All Year Round”

This snack was discovered by Jeremy at Ocean State Job Lot. Review published May 2015.