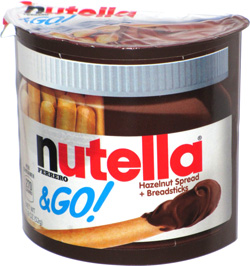 Taste test: This package contained 13 breadsticks, each a bit under 3 inches long, plus a well filled with Nutella. The two compartments were about evenly split as viewed from the top, but a careful look at the package revealed that the Nutella section ran only half the height of the package, as that side had a hollow exterior-facing opening on the bottom. 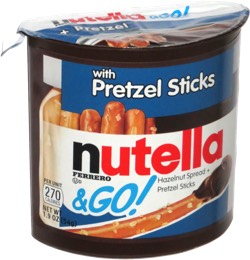 We first tried a bare breadstick, not dipped in anything, and found the taste fairly bland. There was a nice crunch, though. All of the sticks after that one got dipped into Nutella, and that was far better. As expected, it tasted like Nutella, and the breadsticks served only as a vehicle for the Nutella and contributed almost nothing to the taste.

The Nutella well, even with its half height, had plenty to Nutella to put a generous amount on each piece without running out. (There was even quite a bit left over, and I used a butter knife to scoop the rest of it out.) This was a handy way to enjoy Nutella without having to spread it onto something. Because the sticks didn't really add any flavor, you could accomplish the same thing with just a jar of Nutella and a spoon, but that could raise double-dipping concerns.

Smell test: Smells like Nutella. A sweet mix of hazelnut and chocolate, but not too sweet.

From the package: “Hazelnut Spread & Breadsticks” ... “Enjoy the great taste of Nutella® anytime, anywhere.” ... “Made in Germany” ... “Breadsticks: Product of Italy”

This snack was discovered by Jeremy at Christmas Tree Shops. Review published April 2014.