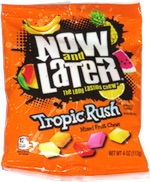 Taste test: These fruit candies promised an assortment of five flavors — Banana, Mango, Tropical Punch, Pineapple and Watermelon. They came individually wrapped in wax paper that included the flavor name on the color-coded wrappers. The square pieces looked much like Starburst, but they were a bit bigger while keeping about the same thickness. Some of the squares were mushed a bit out of shape.

The candies had a softer feel than Starburst, making the first bite a bit less strenuous but otherwise very similar in texture. The flavors were all pretty good, but they didn't all hit their intended flavors well. Pineapple and Mango were good matches. Banana and Watermelon were not. I don't think there's an objective standard for evaluating Tropical Punch in this way, but it was fairly tangy and also tasted good.

One problem with most of the pieces was the wrapper, as it didn't always come off cleanly, with some paper sticking to some of the candies no matter how carefully I peeled. It was tough to get off every last bit, so I did end up eating some small paper scraps.

This snack was discovered by Jeremy at Dollar Tree. Review published February 2021.