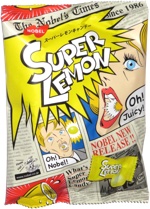 Taste test: These candies promised to be Super, which we took to mean very sour (before taking a more careful look at the package).

The spherical candies had a whitish yellow exterior. When we first tried, the taste was indeed extremely highly very sour, so much so that eating the whole thing seemed an impossibility. After looking over the bag and reading the parts that we could, we found a diagram showing that the sphere had a coating of "Lemon Taste Powder" on the outside, a layer of "Mild Lemon Candy" going inward and a core of "Super Lemon Candy." So for the next try, we patiently endured the sourness for a minute or so while waiting for a more conventional sweetened lemon taste. It did indeed arrive, a nice contrast to the sour start! We couldn't really notice a difference between the Mild and Super parts, but they were both clearly different from the sour stuff. A good one for shock value!