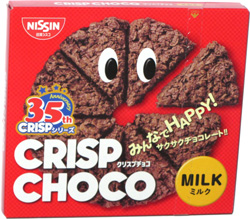 Taste test: The picture on this smallish red box had us expecting some sort of eight-slice chocolate pizza. We opened the box to find a single foil bag, and we opened that to find a plastic tray keeping the eight slices neat and in in place. It looked like the pieces were made from a chocolate version of Frosted Flakes.

When we pulled out our first slice, it got slightly messier, with some loose pieces breaking off, but then we crunched in and found that it was even chocolatier than we anticipated. The feel was flaky, light and really nice, and the chocolate was both milky and intense. It had the feel of a cereal, sort of, but it felt slightly melty and had even more milk chocolate than you usually get with a chocolate cereal. If you can hold yourself to eating just one piece, this one would be easy to share with 7 friends. Great!