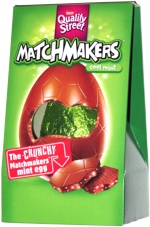 Taste test: This box contained one hollow, foil-wrapped chocolate egg, and it was on the huge end of the egg scale, at 5 inches long. Inside the foil, the egg had a pattern of hexagons etched into the otherwise smooth surface. The package promised that the egg contained not just chocolate and mint, but also some sort of crunchy things too, but there was no sign of the crunchy things on the surface.

After peeling off some of the foil, the mystery was where and how to start eating it. I had no good ideas, so I just kind of smashed one side of it to break it apart. Having to do it this way was a bit messy, but it was worth it because the chocolate was quite good — soft, creamy and minty! There was less of the crunchy stuff than it showed in the picture, but I did encounter some occasional crunches. The package said that it contained eight servings, but I seriously doubt it will last that long.