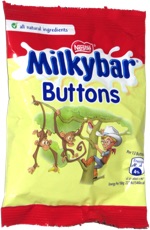 Taste test: These candies were kind of like Cadbury Buttons, with a similar shape, but they were made from white chocolate instead of milk chocolate, and they didn't have the company logo carved into the chocolate anywhere.

The pieces were fairly small, with one side flat and the other domed, but some of the pieces were stuck together along that flat side. There were quite a few pieces in the small bag. The white chocolate taste was strong and pretty good.