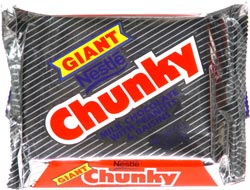 Taste test: It's rare that I have anything all that bad to say about chocolate, especially milk chocolate, but this was one of the worst candy bars I've ever had. The "giant" Chunky was kind of like 4 regular Chunky bars combined into a 2x2 grid of detachable quarters. Each quadrant was itself divided into a 2x2 grid, but those perforations were not as deep, so it was tough to break those up.

Smell test: Strong smell of raisins along with the chocolate.

This snack was discovered by Jeremy at Dollar Tree. Review published October 2010.