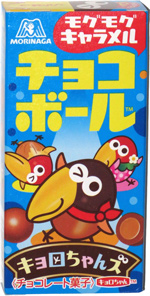 Taste test: This small box featured some colorful bird-like creatures on the front, but it contained chocolate and caramel candies, not any sort of bird products. We opened the box to find the small candies were round-ish with shiny chocolate exteriors, The shapes varied and generally were not quite spherical and had a smooth appearance. The actual candies were much darker than the ones pictured next to the birds on the package, but it was still more of a milk chocolate color than dark chocolate.

From the package: “Serving Size 1.02 oz Servings per container 1”