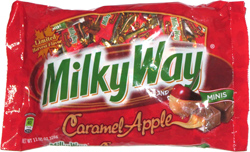 Taste test: This limited-edition version of the Milky Way bar promised the taste of a caramel apple, as they replaced the original Milky Way's chocolate nougat with an apple-flavored nougat and left the caramel layer and milk chocolate exterior as is.

I bit in to find that it didn't taste much like a caramel apple. There were hints of caramel apple on some bites, but the nougat and chocolate really threw the taste in a different direction, so the overall impression was just a somewhat weird taste, not really much like a caramel apple. At the same time, the taste was different enough from the original Milky Way (which I like a lot) that it didn't seem like a Milky Way at all — and that's a bad thing for the Milky Way brand. There were lots of the mini pieces in this bag, so we shared them with lots of our snackers. Nobody was a huge fan, but most thought the taste was OK, while a handful wait it was really awful.

Smell test: Not really like a caramel apple, but there was lots of caramel and a hint of apple.

From the package: “Limited Harvest Flavor”

This snack was discovered by Jeremy at Target. Review published November 2013.