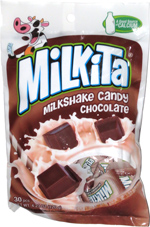 Taste test: This bag contained small, individually wrapped candies that looked kind of like medicine tables, except that they were oversized and bulging in the middle.

They did not look like the blocks of chocolate pictured on the front of the bag, which were apparently supposed to depict the chocolate flavor, rather than the shape of the candy. The outside of the candies had a light milk chocolate color, but the it felt quite solid, so wasn't clear at first whether I was supposed to bite into the candy or suck it. I sucked for a while but didn't seem to make much progress in softening it up. When I got bored of that, I tried biting in, but that didn't really work at all, so I continued sucking. Eventually it softened up enough to bite in and chew. The chocolate taste was mild and creamy, so it did taste a lot like a milkshake. Not easy to eat, but a good taste.

From the package: “A Good Source of Calcium” ... “When you try this flavor of indulgence, sweet memories of sipping a chocolate shake will flow through your senses. And you can enjoy without guilt, because each candy is made with real milk.” ... “Product of Indonesia” ... “Keep your country clean!”