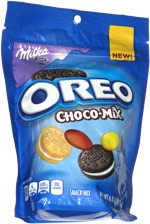 Taste test: This mix promised two kind of Mini Oreos — regular chocolate ones and Golden ones — along with Milka's version of M&M's (called "candy coated chocolate pieces"), which were previously seen embedded in a Milka bar, plus some larger chocolate buttons.

I opened the bag to find that the mini Oreos had kind of a scuffed-up look, and all that I could see from the top were the two kinds of Oreos. I ate a couple of them, then shook up the bag, hoping to find some of the other stuff. Some of the chocolate buttons rose to the top, but I could still see none of the not-M&M's. The buttons had a very light brown color, and a very soft feel upon biting in, delivering a very creamy chocolate flavor — and a nice one. Even after some more shaking, only one of the not-M&M's had emerged, so I did some more eating, along with some cold milk. Eventually, I reached some not-M&M's, which had all settled near the bottom of the bag, with five different colors present: green, blue, red, orange and brown. All in all, it was a good mix, combining some crunch from the cookies to balance out the purely chocolate pieces, with some chocolate relief in the Golden Oreos. But the differing sizes caused segregation by type that made it tough to get an actual mix of things when eating it right out of the bag.

Smell test: Sweet, but not the typical Oreos smell.

From the package: “Packaged in Canada with goods from USA, Canada and Germany”