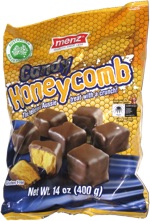 Taste test: These candies from Australia were sort of like large cubes with a honeycomb interior and milk chocolate coating. They weren't actually cubes, as they were somewhat irregularly shaped and were less thick (about an inch) than they were wide and high (an inch and a half), but they did look kind of cube-like. There were also some pieces that were about double the typical size in one dimension, presumably stuck together before being coated.

We crunched in to find a somewhat light and very crunchy, light orange-colored honeycomb interior (get a Cadbury Crunchie if you're not familiar with what this is!) and a fairly thick coating of chocolate. The honeycomb was excellent, with a great taste and super texture. The chocolate didn't stand out and was kind of waxy (probably the words "chocolate flavored coating" should have tipped us off), but it worked well enough with the honeycomb, which was so good that we'd definitely buy this one again.

From the package: “The delicious Aussie treat with a crunch!” ... “Quality since 1850” ... “Australian made and owned” ... “Crack open a bag of Menz Candy Honeycomb for an explosive taste of crisp, sweet honeycomb with a chocolate flavored coating. It's the sweetest candy hit for the busy bee in us all.”

This snack was discovered by Jeremy at Cost Plus World Market. Review published June 2017.