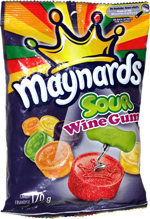 Taste test: These gummy snacks were round and very thick, with a variety of colors but also lots of sugary-looking white stuff on the surfaces that dulled all of the colors a bit. The bag showed a crown atop each piece, but the rough surfaces made it hard to see the crown markings.

I bit into an orange one to find a good fruit taste, actually a lot like an orange, with a very chewy texture, far chewier than your typical gummy. Likewise for lemon and grape: nice fruit flavors, a great match to the fruit and not overly sweet. They were a;ll just as chewy. As for sour, there wasn't much, as the flavor was just a bit sour, concentrated mostly in the aftertaste.

Of course, the whole reason we we eager to try these was that they were "Wine Gums" — but as for wine, there wasn't any. Never mind that corkscrew shown on the bag drilling into the red piece. The back of the bag said that they didn't contain wine, and they didn't taste anything like it. But they were very tasty fruit snacks.