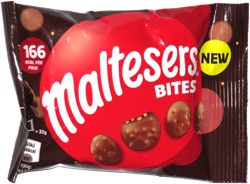 Taste test: The name on this bag had me expecting a smaller version of Maltesers, but I opened it to find something quite different. Instead, the shapes were much like nonpareils (without the coating of white bits), generally round or close to it, flat on one side and gently domed on the other, with a milk chocolate look generally plus some beige malted bits embedded inside. Some of the pieces were stuck together in pairs.

I bit in to find some hints of the expected malted chocolate, but overall there was much less crunch from the malt and much more chocolate than regular Maltesers.

From the package: “Suitable for Vegetarians” ... “Milk chocolate contains vegetable fats in addition to cocoa butter.”