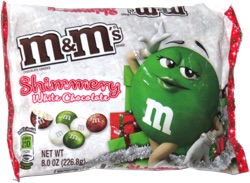 Taste test: This special version of M&M's promised a shimmery appearance and a white chocolate interior. The pieces came in three colors — white, green and kind of a brownish red. The picture on the package showed all three kinds being quite shimmery, even a bit metallic in the case of green and red/brown. But really, the white ones weren't shimmery at all, the green ones had just a slight texture on the surfaces and weren't metallic, and the brown/red ones were shimmery and metallic, though less metallic than the picture showed.

It's clear from past efforts that M&M's does know how to do shimmery, but just chose not to put in the full effort here. When they were making the various "Premiums" flavors (Mint Chocolate, Mocha and Triple Chocolate), they were all very highly textured and quite shimmery, a stark contrast to this "Shimmery" one. Anyway, for these, the white chocolate taste was good.

From the package: “Holidays are better with M™” ... “M&M's® Chocolate Candies are made of the finest ingredients.”

This snack was discovered by Jeremy at Target. Review published December 2016.