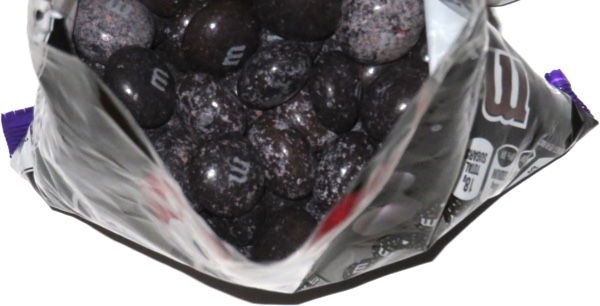 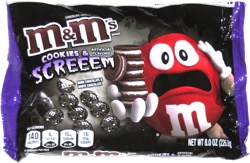 Taste test: These M&M's had textured patterns on their surfaces unlike any we've seen on M&M's since the demise of the Premiums M&M's sub-brand. They didn't glow quite the way the Premiums did, but they did have an impressive look. Some of the pieces did, anyway — the texture was very pronounced on about half of them and subtle on the others. Those with lots of texture had lots of smattered light spots or even a domination of light spots on the generally dark surfaces, not quite a black-and-white look as pictured on the bag, as the tints of the light areas varied from one piece to the next. Those with less texture had minimal, smaller light spots.

I bit in to find a taste that was a lot like cookies and cream-flavored other things. A look at a cross-section revealed a white chocolate core inside a dark area within the shell. When I was patient enough to suck on a piece, I could taste the progression from dark chocolate to white as it dissolved in my mouth. Nice, and definitely a different taste from any other kinds of M&M's!

Smell test: Mostly dark chocolate, but probably some white mixed in too. Nice.

This snack was discovered by Jeremy at Target. Review published October 2017.