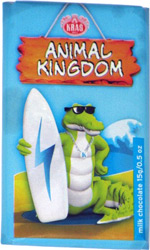 Taste test: The display of small chocolate bars where I found this had a variety of different animals depicted on the wrappers, but I found this to be the most entertaining one, since it featured an alligator wearing sunglasses and a chain around his neck while holding a surfboard.

I peeled open the outer paper wrapper to find a wax paper wrapper covering the actual bar. The bar was very thin (as thin as any chocolate bar I've had) with a 3x4 grid design on top. One corner section had the Kras logo and all of the other ones had just diagonal lines. The bar broke convention by being thicker along the dividers between sections rather than thinner, with an even thicker border around the whole outside, so the sections weren't really detachable, but it was so thin that it really didn't matter. The milk chocolate was creamy and intense, so it tasted pretty good.

From the package: “Product of Croatia by Kras, Zagreb”

This snack was discovered by Jeremy at Market Basket. Review published May 2011.