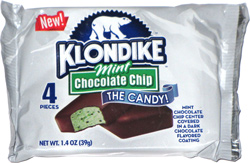 Taste test: This package contained four non-ice cream bars that shared the Klondike name with the famous ice cream bars, but otherwise didn't resemble them much. Each one was roughly (very roughly) square in shape, with chocolate on the outside, and squareness was the main similarity to actual Klondike bars. They were much smaller than Klondike bars, however, at about an inch on each side. Thicknesses varied somewhat among the four pieces in the package, but the average was about half an inch. I bit in to find a green mint colored center, with a nice mint chocolate taste. I was kind of expecting these to taste like York Peppermint Patties, but they really did not, as they were more like mint chocolate chip ice cream, though not really a close match for that either.

We've had some mint chocolate candies that really did taste a lot like the ice cream flavor (popcorn, Chips Ahoy and Oreos) plus some that did not (Pop-Tarts, Brownie Brittle and Pretzel Crisps) ... and these did not. Given the ice cream theme, that would have improved things, but still, they were pretty good.

From the package: “Mint chocolate chip center covered in a dark chocolate flavored coating” ... “4 pieces” ... “Klondike® us a registered trademark of Unilever. Used under license.”

This snack was discovered by Jeremy in New Hampshire. Review published September 2014.