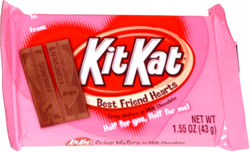 Taste test: This special version of the Kit Kat bar had the usual four sticks, but with some special touches.

A large heart was embossed across all four sticks, with the words "Friends" and "Forever" written on the heart on the two middle sticks. The two leftmost sticks were joined near the bottom of the large heart by a small tilted heart with the Kit Kat logo on it, and the two rightmost ones were joined by another heart bearing the Kit Kat logo. It was easy to break the whole bar in half down the middle, but the placement of the small chocolate hearts held together the two bars of each half so that they could not be separated quite as easily. The taste was typical Kit Kat chocolate, which is to say, very good.

This snack was discovered by Jeremy at Dollar Tree. Review published February 2007.