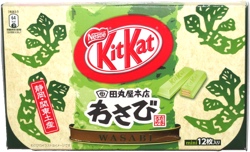 Taste test: The Kit Kat bars in this package from Japan came in smallish 2-finger form, with a light green color on the outside. Having reviewed quite a few wasabi and horseradish snacks over the years, we still had no idea what to expect from this one, as wasabi in a candy bar seemed like a whole other thing.

I crunched in to find the expected Kit Kat texture and mostly a white chocolate taste (green chocolate?!), which wasn't at all what I expected — I was thinking there would be some serious wasabi zing. There was a brief hint of flavor that whispered "wasabi" to me, but without an actual wasabi zing.

I shared around the rest of the bars with other snackers, and my experience was fairly typical. Some didn't notice the wasabi at all, while most noticed a momentary hit of wasabi flavor, but not really any of the legendary wasabi burn. Most people liked the taste, though.

This snack was discovered by Lucinda. Review published December 2015.