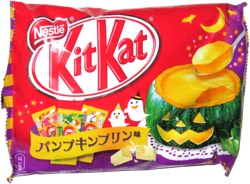 The separate packs had some nice Halloween-themed designs, with at least four different designs for the small packets. We bit in to find a fairly typical Kit Kat texture, with a light crunch from the wafers and soft feel from the exterior coating, but a completely atypical taste. It wasn't chocolate, and it also wasn't anything like the many Pumpkin Spice-flavored snacks we've tried. Maybe kind of like sweetened pumpkin, but not exactly a flavor standout. When offered some bars to a group of snackers, most refused to even try. Of those who did, most didn't like the taste.