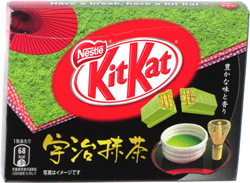 I bit in to find a taste quite unlike any of the many other Kit Kat flavors we've reviewed. I'm no tea drinker, except very occasionally at Chinese restaurants (and with much sugar added), and I'm certainly not a tea connoisseur. I don't think I've ever had green tea. So there's not a whole lot for me to compare the taste to. But having said that, I didn't like the taste much. Not so bad that I had to spit anything out, but normally I can eat as much Kit Kat as is put in front of me; in this case, one of the three packs was more than enough. But when I shared the others bars with green tea-drinking snackers, they liked the taste a lot and said it tasted exactly like green tea.

Smell test: On first whiff, I smelled a bit of white chocolate, but after that, definitely tea.

This snack was discovered by John Franklin. Review published January 2014.