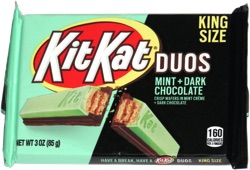 Taste test: This huge package contained two separate four-finger Kit Kat bars, the first ones we've seen under the Duos line, which meant that the bar itself had two different exteriors, with chocolate on the bottom half and mint on top. Inside, the usual crunchy wafers. I opened the package to find that the dark chocolate was indeed quite dark, quite a contrast to the very light green mint portion. The delineation between the two colors was much less well defined in reality than it was in the pictures, as the chocolate reached higher or lower in different areas, and there was a small area where the two mixed.

I crunched in to find a very soft crunch from the wafer, with a tasty mix of mint and chocolate, a very high level of mint. Good.

This snack was discovered at Speedway. Review published December 2019.