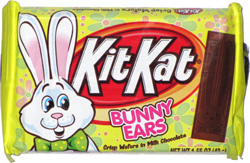 Taste test: This Easter edition of Kit Kat followed the model of some other seasonal versions, modifying the traditional detachable four-finger structure by having a fancy design span multiple fingers.

In this case, the Easter Bunny's face went across two sections at one end of the bar, while the ears extended up separately, each into its own section. The entire four-finger bar contained two of the bunnies. One nice touch was that the bunny was wearing a bow tie, and an even nicer touch was that the bow tie had the Kit Kat logo on it. The taste was the usual Kit Kat, so it was very good. The way each bunny spanned two sections made it difficult to break the bar into four separate pieces, which could be a problem if you wanted to eat just one finger at a time. But that wasn't such a big problem, because two fingers is still who plenty narrow to bite into, and who eats just one Kit Kat finger in one sitting anyway?

From the package: “Crisp wafers in milk chocolate”

This snack was discovered by Jeremy at Walgreens. Review published March 2014.