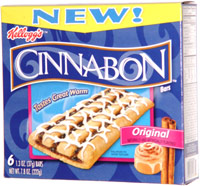 Taste test: These short bars were made from a pastry sort of base, with a cinnamon sugar filling and a sprinkling of white frosting on top.

There were three linear openings in the top of the pastry dough, stretching the length of the bar, exposing the inner filling. The box suggested microwaving each bar for 5 seconds, but they did warn about the potentially dire consequences of doing so improperly. (I particularly liked the one about leaving the microwave unattended. If you're only cooking it for 5 seconds, how could it be unattended?) I tried the first bar cold, and it was pretty decent, with lots of cinnamon and very sweet. But it definitely didn't have that special something that only a hot cinnamon bun has. So for the next one, I nuked it for 5 seconds. That turned out to barely do anything, so I put it back for another 7 seconds, and then were in business. The melted version was quite a bit better, as the melted cinnamon filling reminded me a lot of the taste and feel of a fresh Cinnabon. I don't think the microwaved frosting quite matched the hot fresh frosting on a Cinnabon, but overall the experience was pretty close.

From the package: “What Makes this So Good? It has to be the world-famous blend of rich cinnamon, delicious fresh baked flavor, and melt-in-your-mouth frosting.”

This snack was discovered by Jeremy at Market Basket. Review published June 2009.