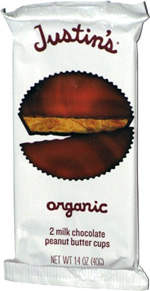 Taste test: These peanut butter cups had generally the same appearance as Reese's, with two same-sized peanut butter cups in the package, with the most noticeable difference being that the wrapper on each cup was white rather than black.

I love Reese's, so I was eager to determine whether these could match up. The mild chocolate was smooth and creamy and not overly sweet, and the peanut butter didn't seem to be as thick as the signature Reese's peanut butter. Everything was more solid and less melty than a Reese's. I liked these a lot, but the taste and feel didn't remind me much of Reese's at all. The same general formula led to a very different, but also good, result.

From the package: “Think of your favorite peanut butter cup. How would you feel if we told you that compared to ours it tastes like chocolate covered sawdust? That's right, I said it. Imagine what happens when I take the best tasting organic peanut butter in the world and delicately place it into the highest quality organic and fair-trade chocolate available. Yup. Peanut Butter Cup Perfection.”