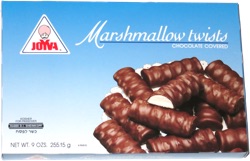 Taste test: This box contained a tray holding a dozen chocolate-covered marshmallow sticks with a series of ridges along their lengths (I guess the were called Twists because they had sort of a spiral-like look, though the weren't really spirals). I bit in to find a soft feel and a texture that was about midway along the marshmallow spectrum from chewy to melty.

The package came wrapped in cellophane, which I didn't give much significance at first. But when I re-opened it the next day to eat some more pieces, I found that the marshmallow felt much chewier, so apparently these have a short shelf life once opened.

This snack was discovered by Jeremy at Stop & Shop. Review published April 2017.