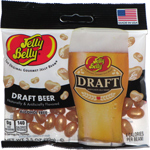 Taste test: This flavor of jelly beans from Jelly Belly quickly drew interest from the snackers we showed them to, but the big question was, would they really taste like beer?

First things first, if you want some buzz, get yourself some actual beer. Even a whole barrel of these won't help; the label said they contain no alcohol.

The beans had the typical Jelly Belly shapes, with shiny, golden surfaces. We shared the beer beans with lots of snackers who were also experienced beer drinkers. Some people didn't think the taste was like beer at all; most thought that the sweet initial taste (which some compared to butterscotch) was not like beer, but the secondary taste was. Many said that it was like bad beer, specifically citing Budweiser, Miller Lite or skunked beer. Still, whether they thought these tasted like beer or not, most people generally did like the taste. Bottoms up!