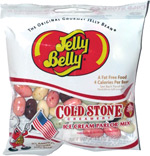 The strawberry ones were supposed to include ice cream, graham cracker pie crust, caramel and whipped topping. I could definitely taste the strawberry, not so sure about the graham cracker or whipped cream, but still good. The mint chocolate ones were pictured as being green on the package, but they were actually a very light blue. They were supposed to include mint ice cream, chocolate chips, brownies and fudge. This flavor was highly anticipated, as Mint Chocolate Chip is my top ice cream flavor. I could taste some very mild mint and a hint of chocolate, but none of the rest of that stuff. Not bad, but nothing special. The apple pie ones really did taste like apple pie with ice cream — though they promised a graham cracker crust that I couldn't taste, but they were still very good. The Birthday Cake ones did sort of taste like a generic birthday cake, but they were supposed to include Cake Batter ice cream, rainbow sprinkles, brownies and fudge, and I don't think I could taste much of the brownies or fudge. The chocolate ones were supposed to be chocolate ice cream, chocolate chips, brownies and fudge. They were OK but not nearly as chocolatey as advertised. I don't think I could distinctly taste all four of those, but they did have sort of a taste of chocolate ice cream and brownies. A fun mix overall.

Smell test: An odd mix to take a whiff of these flavors all together, but good.