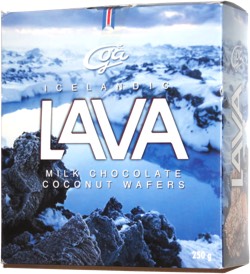 Taste test: This box contained a bag holding a bunch of wafer bars, not conjoined like most wafer bars, but instead coated in chocolate and coconut and piled randomly in a bag. The bars were short and stubby, with a bumpy, lumpy milk chocolate exterior — kind of like volcanic rock, and thus the lava name. (The previous box of Icelandic chocolate-and-coconut wafer bars that we reviewed, ÆÐI alltaf gott í bitum, combined essentially the same elements, but had a thinner chocolate coating and lacked the irregular surfaces.)

We crunched in to find that inside the coating were four wafer layers and three chocolate creme layers. All together, that made for a lot of chocolate, a light wafer crunch and a hint of coconut (less of it to taste than to see). We shared these around with some snackers who had just done an intense workout on stadium stairs, and people seemed thrilled with the taste. Great!

This snack was discovered by Nick Flattes in Iceland. Review published October 2016.