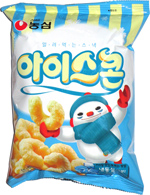 But we crunched in to find that they weren't cheese puffs at all — this was a sweet snack. We shared them with quite a few snackers after an intense exercise session, and reactions fell into two camps: people either liked them or hated them horribly. Most of those in the hate group could not finish one piece — they thought the puffs were that bad. Those who liked them were not consistent in classifying the flavor — people said the taste was like fake banana, or ice cream, or vanilla.