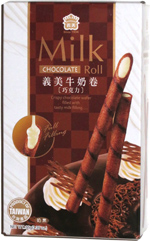 Taste test: This box contained a foil bag that enclosed a two-section plastic tray holding 18 wafer rolls. Each roll was fairly thin, over 4 inches long and had a middle brown color generally, with a darker brown spiral running along the exterior and white filling visible inside the ends.

The picture on the box showed the entire interior of the ends filled in white filling, plus it said "Full Filling," but in reality, it was a fairly conventional coating of the interior surface, not anything close to a full filling. That wasn't a problem for taste or texture, as the rolls were still extremely good, but it was odd that they made the claim. We shared the rolls with many snackers, and everyone who saw them was eager to crunch in and quite thrilled with the result when they did!