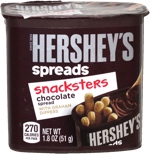 Taste test: This snack followed the same formula as the recent Reese's Snacksters, with nine graham dipping sticks and a tub of dipping spread, which in this case was all chocolate rather than a mix of chocolate and peanut butter. (Don't confuse this product with the previous Hershey's Snacksters, which was basically a party mix.)

The sticks had a nice solid crunch, and the dipping sauce had a texture and taste similar to chocolate frosting, though a bit thicker. The tub was only half as deep as the package, with air below, but there was still enough of the dipping sauce to put a generous amount onto each of the graham sticks.

This snack was discovered by Jeremy at Walgreens. Review published November 2015.