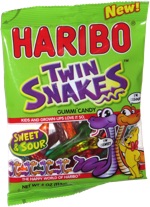 Taste test: This new one from Haribo brought snake shapes to the gummy world — and not just snakes, but conjoined ones! The clever trick here was that each pair of snakes combined one sweet flavor with a sour one. Each snake had sort of a cobra-like head, and the pairs were joined in two places. Eating aside, they were fun to play with, as the snakes could be stretched quite a bit, but once released, they returned the original shapes.

As for the flavors of the snake pairs, sour Cherry (oddly, purple, not red!) was paired with sweet Orange; sweet Apple with sour Lemon; and sweet Blueberry with sour Blackcurrant. I first tried some by separating the two snakes and eating them individually, and it was then that I noticed how odd some of the flavors were. For example, the Apple was sweet, and the Lemon sour, which sort of matches the actual fruits but goes against how they're usually done in candy. In that form, both flavors were fairly bold. Skipping the separation and eating them both at once provided a more balanced experience. Fun to play with, and good for eatin' too!

This snack was discovered by Jeremy at Five Below. Review published July 2016.