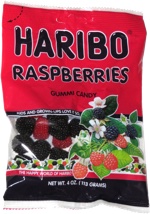 Taste test: These candies from Haribo really did closely resemble raspberries, with reasonably similar shapes and bumps all over the exteriors — but there were no stems, and the bumps seemed smaller than most rapberries I've seen. They came in red and black versions, with small spherical candies forming the bumps on the outside, and a gummy substance on the inside.

The taste was quite good, similar to raspberries, though far less juicy, with a mild crunch from the small bumpy exteriors.

In order to determine whether the red and black ones tasted the same or different, I kept alternating between the two types. At times it seemed like they were exactly the same, but at other times, I thought the red ones were more sweet and the black ones more tart. In the end, I just wasn't sure. (Because I just couldn't figure this out, I ended up eating a lot of each, way more pieces than I had planned.)

Smell test: Mild, but really does smell like raspberries!