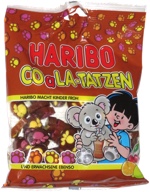 Taste test: These gummies were apparently koala footprint-shaped and mostly brown, with different colors from one piece to the next for the spots of the footprint itself.

The illustration on the bag of a koala sipping a bottle of Haribo cola through a straw was kind of adorable. The gummies were fairly soft and tasted a lot like cola, which could be a good thing if you like the taste of that sort of thing, or not as good of a thing if you don't.

From the package: “Product of Germany”