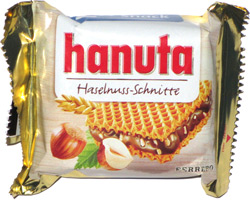 Taste test: This package contained two wafer-hazelnut sandwiches, each in its own gold foil tray, stacked on top of each other. Each one measured a bit over two inches on each side and was just a nudge under half an inch thick. The wafers containing the sandwich had a waffle-like pattern on their exteriors, and the filling was impressively thick.

We crunched in to find a soft crunch and a filling that pretty much tasted like Nutella. It wasn't as liquidly like Nutella out of the jar, but it wasn't entirely solid either. The picture on the wrapper showed some bits of hazelnut embedded into the filling; we couldn't see any obvious signs of this, but we could taste them. Very good, we enjoyed these with cold milk! One is plenty for a nice light snack, but since they provided two, that was even better!

From the package: “2x Knusper Snack”

This snack was discovered by Jeremy at Baltic Deli & Cafe, Boston. Review published .