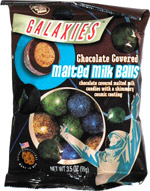 Taste test: This bag contained fairly large spherical candies that looked at first like they were coated in foil, but they actually were not, as the shiny exteriors were really part of the edible candies.

The various pieces were colored in blue, green, purple and gold, with each kind actually constituting a textured mix of that color with some shine to it, plus brown. The shine effect was kind of like M&M's Premiums, though these didn't glow quite so much as the M&M's. There was a very nice crunch upon biting in, as the malted centers were quite crunchy, and there was plenty of chocolate taste to go around, since the thick area between the malted center and the shiny exterior was milk chocolate. Very good.

From the package: “chocolate covered malted milk candies with a shimmery cosmic coating” ... “cosmic fun facts on back panel”