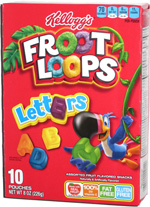 Taste test: After deeply disappointing us with a weird use of the treasured Froot Loops brand by creating Froot Loops Numbers, Toucan Sam is back for more gummies with these Letters. As with the others, they were not shaped like Froot Loops. Instead, they were shaped like capital letters of the alphabet. And the overall shapes of the gummies were not even really like those letters; they were shaped like blocks of gummy with the actually letters on top. The holes and other openings did not all the way through. So in many cases you had to look carefully to even identify the letters. (Even the letter O didn't look anything like a Froot Loop.)

OK, so the shape had nothing to do with Froot Loops. But they made the gummies taste like Froot Loops, right? Not at all; they had tastes similar to other fruit gummies, but nothing much like delicious Froot Loops (whose tastes bear little resemblance to fruits or fruit juice ... which could be why they spell it "Froot"). Fortunately, the taste was pretty good. But why brand them as Froot Loops? Apparently because Kellogg's thought that they could get away with it.

Our seasonal Chief Gummy Eater, 3-year-old Tommy, couldn't have been happier to have been offered these at breakfast time. He wasn't paying too much attention to the shapes, as he was trying to eat as many gummies as he could. He ate his way through as many of the 10 packets in the box as his parents would allow. If he had open access to the whole box, Tommy probably would have finished it himself. That means he liked them a lot.