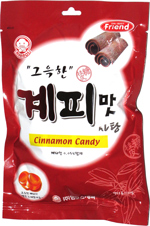 Taste test: This bag contained individually foil-wrapped hard candies. Each piece had a translucent amber color (much more yellow than the orange ones pictured on the lower left corner of the bag) and was about the diameter of a penny but considerably thicker at nearly half an inch.

I sucked on one to find a nice, mildly hot cinnamon flavor, very much like Red Hots or Hot Tamales. Although the cinnamon taste was like those, the form of these was quite different — this was a uniform hard candy material, with no special glaze on the outside like Red Hots, and not the least bit chewy like Hot Tamales. The candies dissolved fairly quickly in the mouth and provided a nice kick of cinnamon without all that much aftertaste. Very good!

Smell test: Can smell the sugary cinnamon, but something else too that was kind of weird and not good.