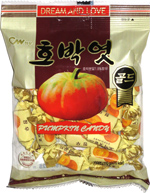 Taste test: This bag contained individually wrapped candies, and based on some similar-looking packages, we assumed that they would be hard candies. It turned out that they were actually chewable — a lot like Bit o' Honey in both appearance and texture. The taste had just a hint of pumpkin, but otherwise it was like taffy, with a nice chewy feel and mild sweetness. It was very good, quite enjoyable to eat.

Although the candy was a hit, the packaging was a bit bewildering. The picture on the bag didn't look that much like a pumpkin, as it somewhat resembled an apple, with a stem that looked thinner than a pumpkin's but thicker than an apple's. The individual wrappers used a different picture, with both a full "pumpkin" and one sliced in half, no stems on either. These really looked like tomatoes.

From the package: “Product of Korea”