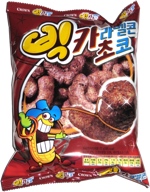 Taste test: This snack shared a similar package design and hilarious mascot with Crown's Peanuts and Maple versions. When we first saw the mascot on the peanut version, we couldn't figure out whether it was supposed to be a peanut or a corn cob, but since it's been reused (and slightly adapted) for two other snacks that don't have anything to do with peanuts, we're figuring it was probably supposed to be a corn cob all along. This time, the cowboy hat-wearing corn cob is snagging a Big Choco puff with his lasso.

OK, enough about the bag! As for the snack in the bag: Despite "Caramel Corn" in this name, this wasn't caramel corn in the usual sense, but instead corn-based puffs. They had good reason to use the word "big" in the name — these puffs were BIG. They were a bit thicker than even the thickest of cheese puffs, with a dark brown color. The maple version was bigger than the Peanut version, and these were even bigger than the maple version.

They were so big that it was just a big awkward to get one of these puffs into the mouth to crunch in. When we did, they had a good strong crunch and were positively loaded with chocolate. It was kind of like the taste of Cocoa Puffs cereal, except even more chocolatey. It was odd that they had "caramel" in the name, because we couldn't taste any — it seemed to be all chocolate. Some of our snackers were a bit turned off by the appearance of the puffs (comparing it to something that comes out of the body), but nobody had anything bad to say about the taste. Great!