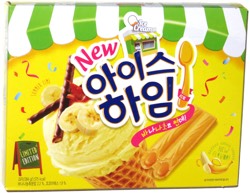 Taste test: It took a while to figure out what this snack was, as it didn't obviously fit into any particularly category. The box contained a whopping 18 packets, each holding two separate pieces, and each of those consisted of two conjoined round wafers. So all together that's 72 wafers — a lot of wafers. And apparently they were supposed to taste like banana split sundaes.

I crunched in to find that the exteriors were a light wafer material, and inside each round cross-section piece was a creme filling that seemed to be a mix of banana and chocolate. The mix of tastes was quite nice.

One odd thing was that the Nutrition Facts put a single serving at two packets. Really, even a half a packet, or one set of conjoined wafers, made for a good-size snack. Yet they were light enough and good enough that eating two whole packets — four times as much — doesn't seem all that unlikely or unreasonable. A good one!