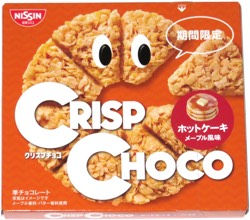 Taste test: This snack followed the same fairly unusual formula as the Milk flavor of Crisp Choco: it was thin and served up like a pizza on a round tray, cut into eight pieces. It looked like cereal compressed together into those pieces, sort of like Rice Krispies Treats.

We crunched in to find that it did indeed taste a lot like pancakes with syrup and butter, just like the picture on the box. They retained the "Choco" part of the name from the original flavor, but there didn't seem to be any actual chocolate. Good stuff. Just one of the eight pieces made for a nice light snack.

Smell test: Very nice, it does smell like pancakes with maple syrup.

This snack was discovered by Jeremy at Super 88, Boston. Review published August 2016.